In a tribute to Charlie Chaplin’s birthday today!

A little tramp (Chaplin) heads out to the Klondike during the gold rush and runs into a notorious crook (Murray) and a kind-hearted, but hungry, prospector (Swain) who has just found a mountain of gold. Trouble is, he loses his memory and can’t find it! Along the way, the tramp finds love with a music hall dancer (Hale) who wants nothing more than an honest, decent guy.

Chaplin has always been a bit of a ‘take him or leave him’ kind of cinema giant. Take his wonderfully inventive comic ballet moments, for instance and leave (in fact, completely erase from the memory) his rather unsubtle shifts between high comedy and low, lachrymose, drama.

In his earlier films, the emphasis had been on slapstick comedy and the rather palling pathos was left in the background. Here, in his first major production (from here on in Chaplin would only make a new feature film every few years) the comedy moments are few and far between, so thank God they blissfully memorable when they arrive.

They are: making a delicious meal out of an old shoe, the legendary dance where he uses bread-rolls for legs and the cunningly staged ‘tilting cabin’.

Chaplin’s regular cameraman Totheroh is to thank for the remarkable photography that ensures this film remains glowingly alive.

The version most of us will see now is Chaplin’s re-issue from 1940’s which, rather aggravatingly, has Chaplin narrating where we used to have titles, though his aim was clearly to make an antique film more marketable to a mass, modern audience. 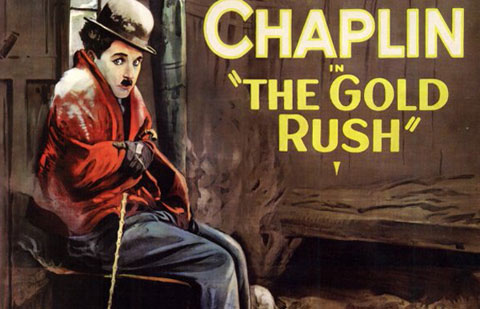 Submit your Comedy Screenplay or Film to the Festival

View all of comedyfestival's posts.